This will raise the age-old question that is perennially thrown at those who advocate government spending: “How are you going to pay for it?”, or “Where’s the money going to come from?”. To answer both these questions, we first need to know how money is created in general.

Since money, exclusively in this model and primarily in the real world, is the sum of the Banking Sector’s Liabilities and Equity, any action which increases Bank Liabilities and Equity creates money. Since every transaction is recorded twice, operations which increase the money supply must therefore occur on both the Assets and the Liabilities/Equity sides of the banking sector’s ledger. Operations which occur exclusively on either the Assets side, or the Liabilities/Equity side, shift money between accounts and do not create money.

Only 5 of the 13 flows in this model affect both the Asset and Liabilities/Equity sides of the banking sector’s ledger: Lending (and Repayment); Government spending (and Taxation); and interest payments on Treasury Bonds. These are shown in the top 5 rows of Figure 1. All other operations are either Liability/Equity swaps, or Asset swaps, and they don’t create money.

Operations that don’t create money include the usual suspects—payment of interest on loans by firms (which transfers money from the Firm Sector to the Banking Sector), purchases of goods from the Firm Sector by workers, capitalists and bankers. But they also include two operations that figure large in conventional arguments about how to pay for government spending: sales of Treasury Bonds to the finance sector; and purchases of Treasury Bonds from the finance sector by the Central Bank in “Open Market Operations” (which are primarily used to control the rate of interest). Neither of these operations create money.

Since it’s an asset swap for the Banking sector to buy Treasury Bonds using Reserves, the answer to “where’s the money going to come from?” is “from operations that increase the sum of Reserves and Bonds”. You can work this out by adding up the entries in the Reserves and Bonds columns of Figure 1: the Banking sector assets Reserves plus Bonds will grow if government spending plus interest payments on Treasury Bonds exceed taxation:

The Reserves that are used to buy the Bonds thus come from the deficit itself. The deficit—the extent to which government spending and interest payments exceeds taxation—creates money in private sector bank accounts (the Firm Sector and Bank Equity only in this model). This boosts the Liabilities and Equity of the Banking Sector. The corresponding Asset that is increased by the deficit is the Reserve accounts of the banking sector. If no interest is paid on Reserves—the “usual” situation, and sometimes made worse by charging negative interest on Reserves in the false belief that this will encourage Banks to lend more—then the Banks have a positive incentive to use these reserves to buy Treasury Bonds instead.

So the answer to the “Where’s the money going to come from?” to pay for the deficit question is that it comes from the deficit itself: the deficit creates money that can be spent in the private sector; and it creates Reserves, which are (usually) non-interest earning Assets of the Banking Sector that are liabilities of the Central Bank—see Figure 2.

What do you think the banks would do, when offered that deal? They take it, of course: this is why Treasury Bond Auctions have always been over-subscribed. Selling the bonds themselves is not a problem. It is, as Kelton emphasises in The Deficit Myth, a “no brainer” swap of a zero-income-asset for a positive-income-asset.

The money needed to buy the bonds has already been created, and is sitting in the Reserve account. Banks then transfer their funds from one Asset that earns no income (Reserves) to another Asset that does (Treasury Bonds). This Asset is a liability, not of the Central Bank, but of the Treasury itself—see Figure 3.

How does the Treasury pay the interest on the bonds? The same way it pays for spending in excess of taxation: it runs up its own negative equity—see the final column in Figure 3.

So the Government can run a deficit, and pay interest on the Treasury Bonds issued to cover it (not finance it: the deficit is self-financing in that it creates money), so long as it is willing to countenance being in negative equity. As noted in the previous post, because Banks must be in positive equity, the non-Banking sectors (and that includes the Government) must be in negative equity. For the Government to achieve positive equity therefore—which seems desirable, if you take the partial view of the economy epitomised by Representative Hern’s motion that “deficits are unsustainable, irresponsible, and dangerous”—the non-Bank private sector must be pushed into even greater negative equity.

To show the consequences for the economy of the government running a deficit or a surplus, it’s necessary to go beyond the purely structural equations used so far, and enable simulations. In what follows, I’ve built an extremely simple model of monetary dynamics in which all expenditures depend on the amounts of money in relevant bank accounts. There are many other ways these expenditures could be modelled, but this way ensures fairly easily that crazy outcomes—like workers have negative bank balances, but still spending their wages—don’t happen in this very simple model.

For example, I relate consumption by workers to the level of workers deposit accounts at the private banks, using the engineering concept of a “time constant”. This is a number that tells you how long an action would take to run an account down to zero, if it’s removing money from the account, or to double it, if it’s adding money to an account. A time constant of 0.02 for workers consumption says that if workers consumed at a constant rate of there were no other inflows or outflows in their accounts, then they would run their accounts down to zero in 1/50th of a year—roughly a week. Higher values for capitalists and bankers—say 2 for capitalists and 5 for bankers—assert that it would take 2 years and 5 years respectively for them to run their accounts down to zero through consumption alone.

You divide the relevant stock (the level of bank accounts, in the case of consumption) by the time constant to get the annual flow—see Figure 4. 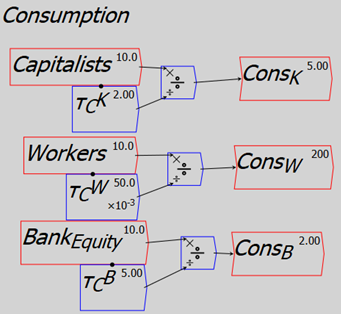 Similarly, a time constant of 9 for bank lending says that if this was the only inflow affecting the level of debt, and it went on at a constant rate, debt would double in 9 years. Repayment with the same time constant means that the level of (private) debt remains constant. 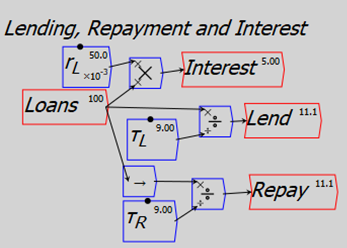 GDP is treated as the turnover of money in the firm sector (it can also be treated as the sums of consumption and investment—which investment is entirely debt-financed in this model—and net government spending, but that makes it possible to end up with negative sums in deposit accounts, unless a much more complicated model is constructed).

Government spending and taxation are treated as simple percentages of GDP. For the moment, I have not considered how they are financed, so the flows BondsB, BondsCB and InterestBonds are not wired up. The equations that define the system’s flows at this point are shown in Figure 7. At this stage, sales of Treasury Bonds to the Banking Sector, Central Bank purchases of Bonds from the Banks, and Treasury borrowing from the Central Bank, are not defined.

Figure 7: All the flow equations in the model (without bond sales or interest on bonds)

With no explicit financing of a government deficit, the negative equity that this causes for the government turns up as a negative balance in the Treasury’s account at the Central Bank—see Figure 8, which shows the impact of a 2% of GDP deficit for 60 years on the Treasury. It runs accumulates negative equity of $160, and that is entirely due to its account at the Central Bank being negative to the tune of $160.

Figure 10: Bond sales are equal to the deficit, no Central Bank purchases of Bonds from the Banking Sector

Since those Bonds have been purchased off the Banking Sector, the Banking Sector has Reserves of 160 (see Figure 14). This is not as desirable a situation for the Banks as when they own the bonds, because with no Treasury Bonds they receive no interest payments from the Government. Far from the finance sector in general having “Bond Vigilantes” ready to deny the government bond sales if they’re worried about the state of government finances, the “Bond Vigilantes” are vigilantly on the lookout for sales of Treasury Bonds so that they can swap out of a non-income-earning asset and into an income-earning one.

12 thoughts on “The Mathematical Model of Modern Monetary Theory 2”