Credit and the Aggregate Expenditure is Aggregate Income identity 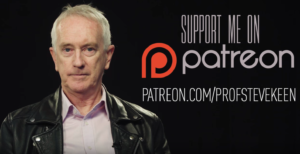 The next 3 tables obey the “Fundamental Law of Accounting”, that “Assets minus Liabilities equals Equity”, and show the monetary flows in a stylised 3 sector view of an economy from the banking system’s point of view. Each sector (imaginatively labelled S1, S2, and S3) has a bank account out of which it spends, and the bank has two accounts of its own: Loans (which are an asset of the bank) and BE, which is the net equity of the bank.

For the sake of simplicity, I ignore bank interest payments on deposits, and also ignore the bank’s own expenditure until it has some “skin in the game” via making loans—which in the first two tables, it doesn’t do.

In each table, I signify flows by lowercase letters, and stocks—when they turn up in the argument—by uppercase letters. So “a” represents a flow of “a” dollars a year (where “a” might be $1 trillion a year, for example). When I consider interest on loans, I use ρ, the Greek “r”, for the rate of interest.

Each row is labelled by the sector as well (S1, S2, S3, and BE), and where the row and account labels are the same, the cell shows the expenditure by that sector on the others. So in Table 8, sector S1 spends the sum of (a+b) dollars per year buying goods and services from sectors S2 and S3. Its expenditure becomes an identical amount of income per year for those other sectors.

Since expenditure by S1 shows money flowing out of its sector, I show expenditure as a negative, and since that become an income for the other two sectors, I show the income to sectors S2 and S3 as a positive. Each row therefore necessarily sums to zero, and this displays the logic behind the statement that one sector’s expenditure is another sector’s income.

Equation 1 to be added.

The flow of new debt l (which is the rate of change, in dollars per year, of the outstanding stock of debt of L dollars) does not appear, because its “nets out” between Sector 1 and Sector 2: when lending is between one non-bank sector and another, one sector’s expenditure falls (by l dollars per year) to enable it to make the loan to the other Sector, which allows the borrowing Sector’s expenditure to exceed its income.

Equation to be added.

This shows why bank lending is fundamentally different to lending between non-bank agents. A change in debt between two non-bank agents has no effect on the quantity of money in existence: it merely redistributes the existing stock of money between them. It also changes aggregate expenditure only if there is a significant difference in the spending propensities of the two the agents, or if the lending changes spending patterns.

However, a change in bank debt both changes the amount of money in existence, and changes demand and income by the same amount, because it is not offset by any change in spending by the lender: the bank does not lend out money it has “saved”, but creates new money and debt at precisely the same moment. This is why there is a one for one equivalence between the change in bank debt, and credit, and demand, and income.

Crucially, it is also possible for the change in debt (l in the preceding tables) to be negative when agents are in the aggregate repaying debt, rather than taking on new debt. While rising debt increases both aggregate demand and aggregate income, falling debt causes them to decrease.

One more element of realism is needed to apply this insight to actual economic data: borrowing can be used to finance not merely the purchase of a flow of new goods (which is part of GDP), but also the purchase of assets. The hermetic separation of macroeconomics and finance that is also part of mainstream economic theory is therefore also invalid. The change in debt will be part of the demand for assets as well as demand for goods, so that a more accurate relationship is that aggregate expenditure is the sum of expenditure on goods and services plus expenditure on assets, and this will be identical to aggregate income plus realised capital gains. Since the vast majority of money that is borrowed into existence today is used to buy assets rather than goods and services, the impact of a downturn in credit-based expenditure is felt first on asset markets.

The question then arises of how to measure these flows: is it valid to add GDP to credit, as I have done to construct Table 4 to Table 6? It is, to the extent that credit is not used for purchases of goods and services—when it is used to buy assets, the sale of which is not recorded in GDP. Though accurate figures aren’t produced, it appears that up to 85% of credit is used for asset purchases, rather than for goods and services.

The scale of debt & economic downturns

The next three tables consider a stylized economy in which all credit is used for asset purchases, so that GDP (expenditure on goods and services and income from them, dimensioned in dollars per year) and credit (the change in debt, dimensioned in dollars per year) can be added together with no overlap to measure aggregate demand for both goods and services and assets in an economy. What happens to aggregate demand if:

Table 4: The impact of a slowdown in credit when the debt/GDP ratio is 77%

Table 5: The impact of a slowdown in credit when the debt/GDP ratio is 155%

Table 6: The impact of a slowdown in credit when the debt/GDP ratio is 193%

[3] Interest on deposits is also part of aggregate demand: gross (not net) financial transactions are part of gross expenditure and income.